Wedding Traditions From Around The World

Posted 22 months ago Less than a minute to read 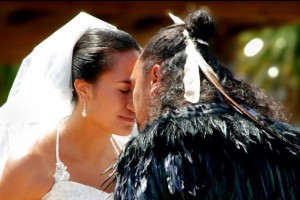 This Dutch wedding tradition is one that could be easily adapted into any wedding ceremony. In place of a guest book, wedding guests in the Netherlands are invited to leave notes of good wishes on the branch of a small potted tree called a Wishing Tree. The tree itself can be adapted to complement any wedding theme – from a simple weathered tree branch for a rustic and romantic feel, to a metal and crystal tree for a modern, elegant touch.

Doves are a universal symbol of peace and love, and these white birds play an important role in Filipino weddings. Filipino newlyweds traditionally release two doves, one male and one female, as a symbol of marital peace and love in the years ahead.

This age-old Japanese tradition is called san san kudo, and literally translates to three, three, nine times. During the ceremony, the couple drink sake three times from three different cups, while exchanging cups as a symbol of exchanged vows. Both sets of parents are also invited to drink from the sake cups, to represent the union of two families.

In Indian weddings, the bride’s oldest sister attempts to steal the groom’s shoes and the groom has to pay a bribe to get his footwear back. Indian brides spend hours getting mehndi, intricately painted henna artwork that lasts about two weeks on the skin. It’s thought to help calm the bride having to deal with the stress of a wedding day.

In Cuba a dance with the bride comes with a price. Every man who wants to dance with the bride is required to pin money onto her dress. A great way to fund a honeymoon! And in Nigeria, guests make it rain money. Literally! It’s customary for guests to toss bills at the newlyweds as a gesture of happiness.

Similar to sake drinking in Japan, the bride at a wedding in China traditionally would serve tea to the couple’s family before the wedding and after the ceremony. Each person is served a cup of tea and each takes a sip. After they sip, each relative hands the couple a red envelope containing money, jewellery or another token. The ceremony is a way for the couple to show love and appreciation for their families.

Historically, traditional Māori marriages were shaped by the importance of family and tribal links, with most people’s partners ideally being chosen from within the hapū or iwi group. Nowadays, societal rules around marriage in New Zealand are much looser. Incorporating te Reo and Māori tikanga into wedding contemporary ceremonies would usually run like this:

“One of the women from the iwi that the person is marrying into will karanga, or call to invite the person and their family into the place where the ceremony is being held. This can be anywhere from a marae to a church to someone’s back lawn. Depending on how formal the ceremony is, when the guests are assembled, there may be a karakia where the atua and whenua are welcomed in by the kaumatua or the iwi’s tohunga before the wedding formalities begin.

The celebrant will take the couple through their vows to each other, and as a symbol of the love between them, the couple will place korowai around each other’s shoulders. The couple are announced married and presented to the assembled families and friends. Each person then greets the married couple with a hongi to welcome them into their new lives. The wedding ceremony is followed by a feast where family and friends will eat, sing, dance, or perform haka.”