Posted 15 months ago Less than a minute to read 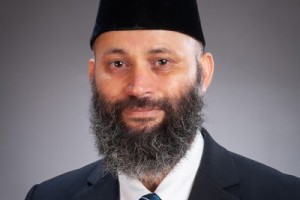 Tahir Nawaz has been a marriage celebrant since 2014 and specialises in religious marriages.
Tahir is also Board member for New Zealand centre for Global Studies (NZCGS)

As an Adjunct Fellow in the Wellington Faculty of Education, Tahir Nawaz works on partnerships to connect Islamic students and the Islamic Community with the Faculty. He is also providing chaplaincy services to all Islamic students in the University.

Tahir Nawaz is a senior analyst of Muslim affairs based in Wellington, New Zealand. He had been involved in community service as the President of the International Muslim Associations of New Zealand (IMAN).
Currently Chairperson of Deen Welfare Trust, which provides social services to migrant communities

Since 2010, he has been referenced and interviewed by national and international mainstream media on Muslim affairs, especially in New Zealand and the Pacific. This role has been supported by his traditional training of Islamic studies in New Zealand, Malaysia, Pakistan, and Indonesia.

Tahir has designed and supervised the curriculum of Islamic education applied in various institutions. His research interests include Muslim affairs in New Zealand and the Pacific, Muslim education, interfaith dialogue, halal, community service, and Islamic organisations.

Tahir is Justice of the Peace for New Zealand, and is also a White Ribbon Ambassador, who continues to advocate for equal rights and end to violence towards women.